Mama and I just finished watching Titanic. I found our old VCDs earlier and ended up watching the first half of Vertical Limit and the discs 2 and 3 of Titanic.

This film is (as usual) emotionally exhausting to watch, so we both found ourselves barely moving on our seats as we watched everything right to the very end of the credits (yep, we both even uttered names of those we thought are Filipinos). It was her first time to watch it again after sooooo long and I knew by the look on her face and tears on her eyes that she was a bit traumatized.

Likewise, no matter how many times I see this film, I cannot keep myself from breaking into tears. I know it has a lot to do with the musical scoring, thanks to my favorite, James Horner, but I also have to give it to Jack and Rose for the short but truly sweet thing they had going, until the very end.

I love how this film affects me in so many ways possible and differently each time I watch it. I love how I’m always reminded that life is short and how we always take it for granted.

I also realized how lucky they were (had they been real people) for finding true love, despite it being short-lived. That won’t take away the fact that it was still truly special.

I realized how small my problems are, compared to what the passengers of the infamous liner have gone through. I also realized how love can make everything seem so simple and easy…nothing a little lovin’ can’t fix.

Watching Jack and Rose fight their way through one obstacle after another gave me hope and inspiration to keep moving forward myself. After all, it is what life is all about…

to keep breathing, to pick yourself up, to treat everyone nicely and to love.

In the end, Rose struck me with her little speech and with this line that I didn’t realize was there until today…

“But now you know there was a man named Jack Dawson and that he saved me… in every way that a person can be saved.”

Much like how this film saved me from losing my sanity in such a difficult time.

P.S. Didn’t know Google has this little treat for their users. Made me smile yesterday 🙂

I remember the first time I saw this, it was still on VHS and I could not exactly understand all the conversations because they were delivered way too fast for me back then. I was more focused on the visuals and somehow I managed to understand the whole context of the film through that. I guess, all I knew then was that there was this huuuuuge ship that sank because the two men who were supposed to look out for icebergs got distracted by Jack and Rose who just came out doing some steamy stuff from inside a steamy car :P! haha!

Anyway, years later my father bought the a VCD copy of it which I get to watch, up until now. True enough, I saw it again yesterday for the 8th or 9th time and it’s true what they say, you discover new things about the exact, same film as you watch it over and over.

Could you imagine that it was only yesterday that I found out that the captain of the ship was warned about the icebergs yet he chose to still speed up despite that? Clearly, I wasn’t paying much attention before!!!! 😛

It was also only yesterday that the line “love can touch us one time and last for a lifetime, and never let go til we’re gone…” from the movie theme song struck me and not only because I’m in love but also because I realized how short-lived Jack and Rose’s story was yet it was the love that Rose could never ever forget despite the coming of a new guy in her life.

Of course this entry wouldn’t be complete without me sharing my most favorite scenes, right? So here they go:

1. The chance encounter – I don’t know what would’ve happened if jack and Rose never met at the back of that ship when the latter was about to jump off of it. The whole exchange of lines between them was very entertaining. You could tell that Jack was really smart and witty enough to convince Rose to do otherwise.

2. The party – Jack was invited to dine with Rose, Cal and the rest of their group and as expected, Jack did surprise them all with his intelligent remarks and opinion. It was also then that I first saw Jack give Rose a secret note so that they could sneak out and go to a “real party”. Loser, I know. I guess I just wasn’t paying attention before or I just completely forgot. 😛 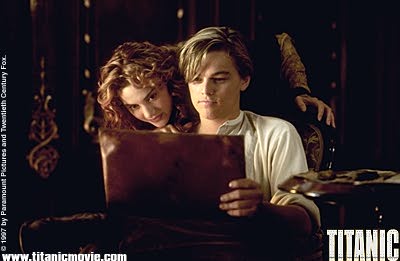 3. The intimate nude drawing scene plus the S scene afterwards 😛– I love how it made them both feel nervous at first yet comfortable the moment the ice was broken between them. Plus what made me like the whole scene even more was the trivia I recently read from one of Yahoo’s Featured News about the film: that it was James Cameron who drew Kate Winslet’s nude body on that paper and It was James’ hands drawing her on that film. I felt almost as astounded when I found out that it was Mel Gibson‘s hand who nailed Jesus’ hand on the cross in his film, The Passion of the Christ! Ang babaw ko lang, I know!

It also was entertaining to know that behind the scenes, Kate had to flash Leo on the first day just to break the ice between them. Kulit lang!

The S scene, I need not elaborate on. Everyone liked it. Don’t even dare deny it! HAHAHAHA! I know it was Black Saturday when I saw this so please forgive me, God. I was completely on flat affect during the whole scene, I promise!

4. The I-jump-back-to-the-ship-when-I-realized-that-Cal-was-lying-when-he-said-that-he-made-arrangements-for-him-and-Jack scene – So that’s basically the whole scene. This is when I usually cry the most. Fireworks were set off, illuminating Jack’s head and Rose’s sooooooooper white face. Klavier’s Piano solo was playing (the very intro to that solo gets me every single time :'((((((() It’s almost as good as the “Perfect Storm/John Mellencamp’s Yours Forever” except that it was played using a bagpipe. Ay ganda!. (daming side comments eh).

You know what they say, the most powerful scenes of a film are usually the ones when no words need spoken. The eye contact alone, the gestures give you goosebumps already.

Pamatay Scene: When Jack looked Rose straight in the eyes (without blinking ah :P) realizing it was the last time he’ll ever see her again because she’s going to live and he won’t. The boat was slowly lowered and you could see that Jack was trying to hard not to cry! SHIT! Just thinking about it makes my eyes water! (Of course, Klavier’s piano solo is on repeat mode as we speak haha!).

5. The Babies Speech aboard the floating Door – This would probably be one of the most touching scenes ever.

Jack’s speech in the end, ay grabe, the sweetest in the world. No wonder Jack is fictitious. Some guy you met on the night you were about to commit suicide gives you a pep talk not to do it, bonds with you for a couple of days, falls in love with you, sacrifices his life for you and tells you that “Winning that ticket, Rose, was the best thing that ever happened to me… it brought me to you.” AY HABA NG HAIR MO ROSE!!! IKAW NAAAA!!!!!!! HINDI, IKAW TALAGA EHHH!!! AWARD!!!

A FEW MORE SHORT SCENES I WILL NEVER FORGET:

So that’s it. I just thought it would be nice to make this movie part of my blog the same way that it has already become part of my life. YEHEESS GUMAGANON?!? I even bought one of these cheap Titanic trivia books in National Bookstore (together with the Mysterious Crimes of the Century book of the same publishing house) back during high school days just because I was once so engrossed by the mystery/story behind the said Unsinkable, Ship of Dreams!